Question: What is the optimum temperature for the Geobacillus stearothermophilus amylase? Hypothesis: The optimum temperature for the amylase obtained from Geobacillus stearothermophilus is high, most probably above 60 ? since the bacteria mainly lives in high temperature environments such as hot springs. If the temperature of the reaction environment rises above 60 ?, then the amount of maltose formed from the reaction of the bacterial amylase, will be the highest concentration. Reagents: Distilled water, Buffer, 5% starch solution, bacterial amylase, 3,5-Dinitrosalicylic acid (DNS) Equipment: 12 test tubes, test tube holder, water bath, spectrophotometer, cuvettes, micropipettes. Procedure For the determination of the effect of temperature on the activity of Geobacillus stearothermophilus amylase, 6 test tubes are labelled and placed in a test tube rack. 450 ?l of distilled water is added to each test tube followed by the same amount of buffer solution that helps to maintain the pH of the reaction environment. 450 ?l of 5% starch is them added to the six test tubes, followed by 100 ?l of the bacterial enzyme. The tubes containing the mixture are then placed in water bath calibrated at varying temperatures (0?, 25?, 37?, 45?, 65?, and 85?) for 10 minutes. Afterwards the tubes are recovered from the boiling water bath and 1 ml of DNS is added before being transferred to a boiling water bath for 5 minutes. After the 5 minutes have elapsed, the tubes are recovered, and 8 ml is added to dilute the contents. The absorbance of each tube is then determined by transferring part of the solution to a cuvette and then taking readings using the spectrophotometer. The contents of the first tube can be used as blank solution to reset the spectrophotometer. The absorbance of solution from each test tube corresponds to the amount of maltose produced at each given temperature, which also reflect the level of the amylase activity. DATA ANALYSIS Experiment setup for temperature   Data from the study of the Effect of Temperature on Bacterial Amylase Activity   Concentration of maltose produced was read directly on the standard curve in part 2 Formula used to calculate the activity of maltose: [Maltose (mg/ml) ÷ Time (min)] For instance: Maltose produced in tube 2: 0.049 Time incubated: 10 minutes Therefore activity: (0.049 ÷10) = 0.0049 mg/ml/min   Graph of bacterial amylase activity vs. temperature: 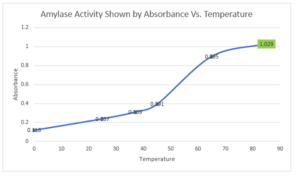 Want this paper done for you?

Click the make order link and you will be directly directed to the order page where you will complete the order.

How can we help you?

Contact our support team if you need help or have any questions?